How To Create An Alice In Wonderland Afternoon Tea

I used to love afternoon tea when I worked at The Nook on the Square. The owner had learnt how to execute it just right from her training at one of the top London Hotels. From the dainty, flowery, china crockery, to the finger sandwiches that had to be precisely cut each time, the warm scones with clotted cream and jam and finally the attentive waitress service.


Whilst working there I discovered a couple of London hotels that offered alternative afternoon teas such as ‘The Gentleman’s’, ‘Charlie and the Chocolate Factory’ and ‘Alice In Wonderland’. The latter, especially, excited me. It was a chance to be creative and serve something just that little bit different to what everyone else is doing. It became an obsession of a dream for 2 years until I went to work at Evergreen and, as New Year dawned, I  made a date for Alice In Wonderland Afternoon Tea – March 26th, Mother’s Day!


So how do you plan an Alice In Wonderland Afternoon Tea?


First head to pinterest, where else?? Start a board and look for ideas. Search everywhere and pin your ideas. If it’s any help here’s the LINK  to mine .
Next thing I did was to order the dvd from Amazon, (the Disney version not the modern one with Johnny Depp). 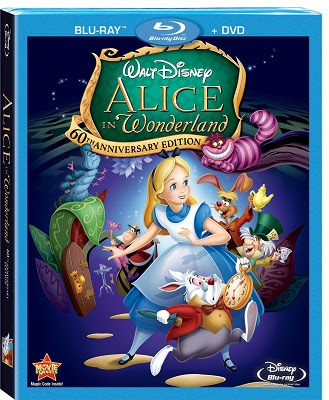 I hadn't watched the film in years so it was lovely to familiarise myself with the characters and make lots of notes for ideas. Next job, plan the menu!

I'm not great on the computer but I was really pleased with the way the menu came out. I designed it in the form of a scroll as that was what the white rabbit carried. I changed the wording a few times after seeing different things online.
﻿
﻿

My next project were the ‘eat me’ and ‘drink me’ labels.

I bought coloured card from my local Hobbycraft and cut out ‘tag’ shapes. On word I chose different clip arts and printed them off, cut them out and stuck on to my labels.

I ordered these very pretty napkins from Amazon. They were from a company called Talking Tables, I can highly recommend their service. 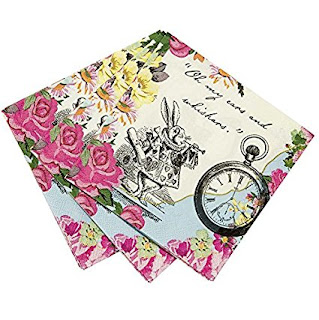 As well as these cardboard cut-out teapots for table decoration. I was originally going to order one per person but ended up just having one or two per table. 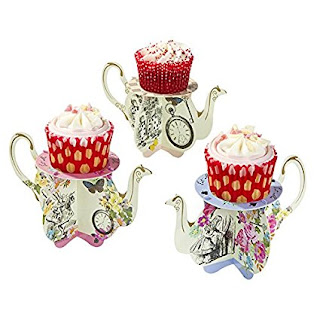 After ordering those I discovered a tutorial on how to fold napkins into rabbits! I just had to do some of those for decoration as well!
You can find the tutorial through this LINK . The first one was a bit fiddly but once I mastered it they didn't take long to make at all.


So as the day finally arrived we had 75 people booked for the special event over 4 time periods. I worked hard the night before prepping food and very early in the morning.


The sandwiches were fiddly to make but VERY effective! For the playing cards I made 3 finger sandwiches out of each sandwich. With a cutter I cut a small heart out of the centre of each finger then swapped brown hearts into white bread and vice versa, (if that makes sense!)


For the caterpillar I cut 4 circles out of a slice of bread and sandwiched together 2 white and 2 brown with circles of cucumber and cream cheese.

For the jam tarts I used a mini muffin tin and a flower shaped cutter. I blind baked the pastry flowers first then just warmed some jam and poured in the case and left to set. I got the idea from THIS BLOG 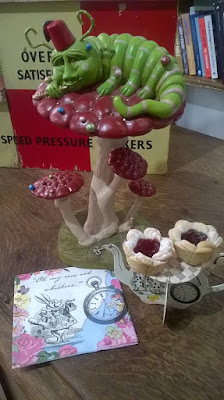 The chocolate cupcakes were just a basic chocolate sponge recipe and I cut out an orange, fondant daisy for the top of each for a bright colour.


It took about 4 hours, on a low heat, in the oven for these bright red meringues to cook. When they were ready I used a basic water icing to stick each one to the top of a marshmallow and then small icing dots all over for effect.
﻿﻿

With all the food prepared it was time to turn our attention to laying the tables and putting out our decorations. 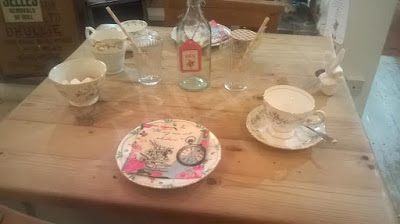 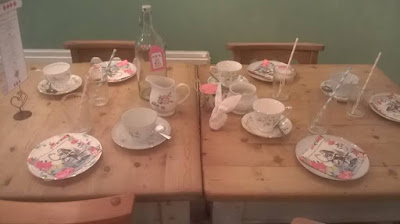 And a signpost to lead the way! 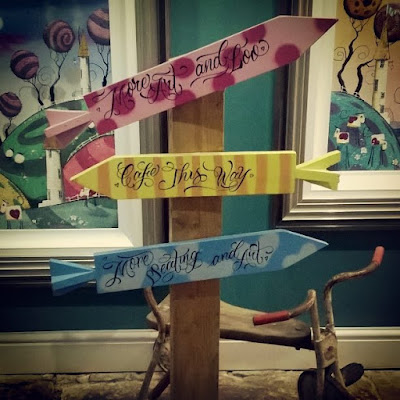 Finally we displayed all the food on 3 tiered cake stands ready for our customers.

I had waited 2 years for this day. Between 12pm and 4.30pm we served 75 people. Hard, hard work putting it all together but oh what a success! Great feedback from all customers and a great sense of achievement that it went so well. 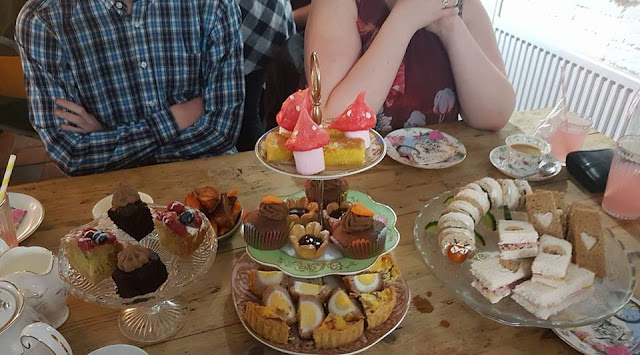 Thank you for stopping by to read this post. Please feel free to leave a comment, especially if any part helped you to plan your own party!

I'm joining in with the link party at Cooking & Crafting with J & J and looking forward to seeing what other bloggers have been up to this week.

Posted by stylesofcooking at 17:57 2 comments:

I cannot believe it’s already a  week since I attended the ‘Sunday Farmers Market’ cookery lesson at La Cucina Caldesi.
I was given the lesson as a Christmas gift, through ‘Virgin Experiences’, to enhance my recent interest in Italian cookery.
La Cucina Caldesi is situated at the bottom of Marylebone Lane, London. Owned by Katie and Giancarlo Caldesi the various classes offer hands on Italian cookery with the emphasis being on seasonal Italian food using fresh local produce.
I was rather nervous as I travelled to the school last Sunday morning as I don’t mix well with strangers, and I hate it in these situations where you have to introduce yourself and say something about yourself. Much to my delight there was none of that.
I was first to arrive and was offered a coffee whilst awaiting the others. 13 other people joined me, along with our chef/tutor for the day Stefano and straight away a relaxed atmosphere was achieved.
Stefano was the perfect host/tutor. He worked the room well with his knowledge, skills, conversation, wit and humour.
The first part of our day was a visit to Marylebone Farmers Market, which is just a few minutes’ walk from the school. Stefano bought ingredients for our lesson whilst we had 20 minutes to have a walk round and look at all the stalls.

On our return we all donned our ‘Caldesi’ aprons (which we got to keep at the end of the day) and picked a spot around the big square table. Each dish to be prepared was explained in full detail by Stefano.


We were to make bread sticks, tomato bruschetta, stuffed courgette flowers, ceviche, sea bass with roasted potatoes, olives and tomatoes with green beans and aubergine and, for dessert, an amaretto trifle.


It wasn’t possible for us all to make everything so we went in groups of2s and 3s and were given different parts of the meal to prepare. I paired up with a lady called Freddie, and we made the custard for the trifle.
I think the only criticism I have of the day is that while we made the custard we had to leave the table to use the stove which took us away from everything else being prepared, and a bit out of the group. Freddie had hoped to be able to make bread dough and I had wanted to watch the courgette flowers being prepared.

Despite not making the bread dough we each were given a piece from the ‘proved’ dough to roll out breadsticks and coat with sesame seeds and nigella seeds. 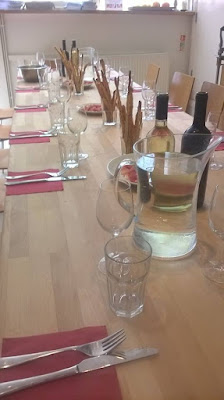 Finally we all sat together and enjoyed all the food from the days lesson with red and white wine to accompany the meal.
It was a lovely atmosphere. We had all got on so well right from the start of the day and the room was filled with good conversation and plenty of laughter. Again Stefano was a great host!

Posted by stylesofcooking at 20:04 No comments:


I arrived for my first day at Evergreen Art Café at 9am on June 1st. 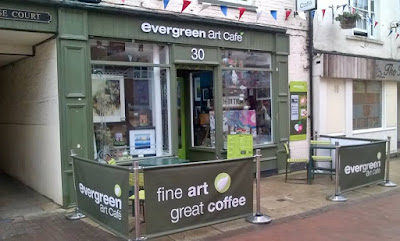 I was given a desk, a computer, a fresh new A4 pad, a pen and instructions to CREATE MAGIC! 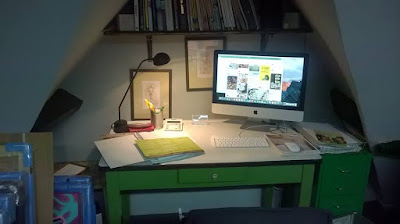 Below is a selection of photos of Evergreen Art Café. 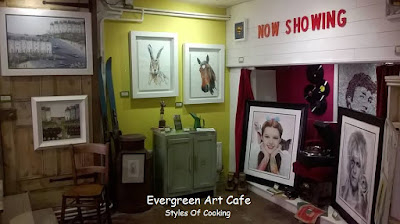 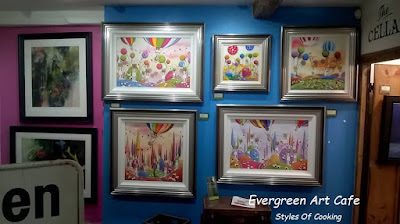 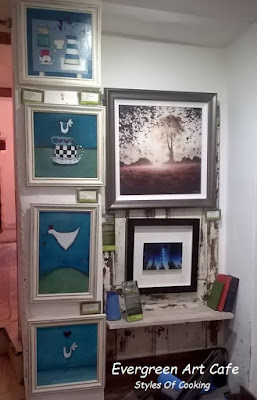 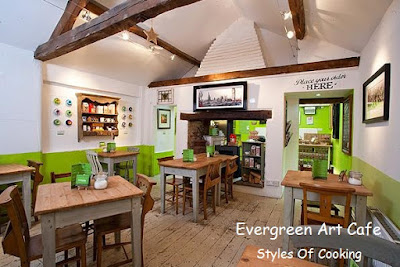 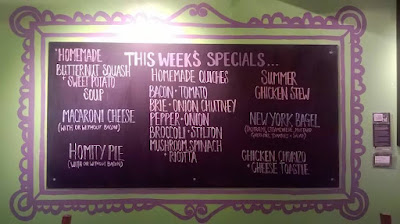 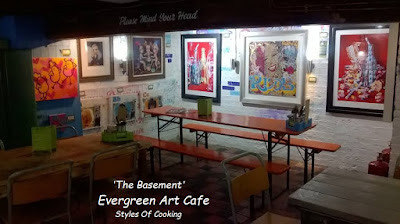 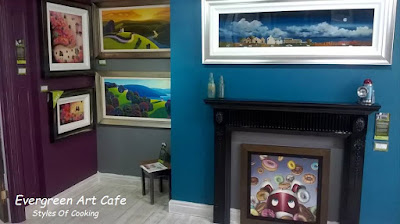 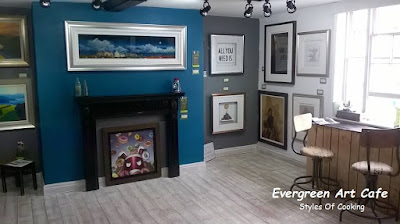 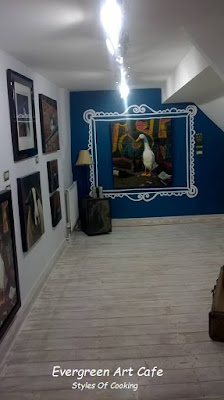 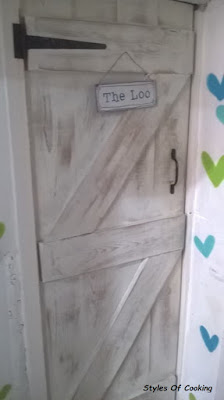 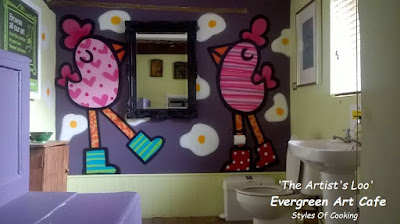 The new kitchen was finally completed and ready for action on July 14th
Friday 29th July was Evergreens 6th birthday so what an ideal date to bring in the new menu. My menu!!! 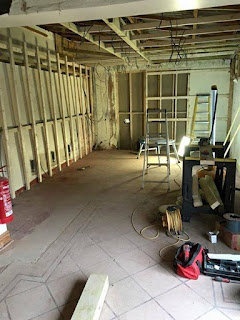 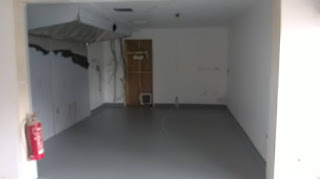 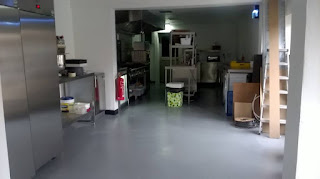 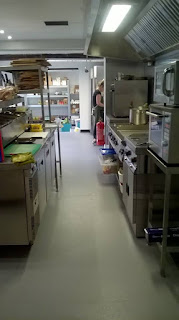 The new menu can be viewed here at Evergreen Art Cafe.
Excited, chuffed, nervous and proud to be continuing my food journey at Evergreen!

Posted by stylesofcooking at 23:56 No comments:


I don’t remember the exact date that Kate told me she had decided to close The Nook, though I do remember it was a Wednesday. We sat in the front room at the end of a normal working day and she said ‘there’s no easy way to say this but……..’


I could totally understand her reasons of wanting to spend more time with her small children, I had been in a similar position about 12 years ago.


My first reaction was to rent the café from her until she explained she wanted the building turned back into a family home. Again I understood.


From that day I looked at every possibility for my future. I scoured the job sites, looked at vacant retail properties and even emailed a local, empty B&B with an offer of rent. I was offered a job in a local pub so handed in my notice and, at that point, all the staff were told and then the public.


When the news finally hit Facebook I was surprised to be approached by a local café with an offer of running their newly extended kitchen, which hadn’t, as yet, been installed! It was a good offer, actually a brilliant offer, so I accepted it.


And so begins a new chapter for me.


As of June 1st 2016 I take on my new role as Head Chef at The Evergreen Art Café in Daventry.


More of that to come but for now I say a fond farewell to The Nook, Kate and all the staff I have worked with over the past 20 months. It has been a challenge, a great learning experience and a lovely ‘family’ to belong to.
Posted by stylesofcooking at 18:47 1 comment:

Email ThisBlogThis!Share to TwitterShare to FacebookShare to Pinterest
Labels: the nook, The nook on the square
Older Posts Home
Subscribe to: Posts (Atom)

stylesofcooking
Head chef at The Evergreen Art Cafe, Daventry formerly at The Nook On The Square. Love my job, always learning about food, and experimenting with new ingredients and recipes. Come with me on my journey. Feel free to comment on any post, all feedback is gratefully received. Lisa x